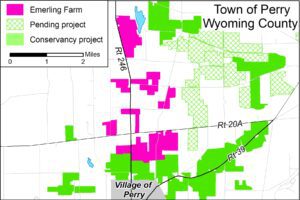 The desire to permanently protect farmland has its seeds back in the 1960s for the Emerling family.  That is when Jerome Emerling relocated out of Erie County due to external development pressures and land sales motivated by non-agricultural landowners.  Building a long-lasting agricultural future there just wasn’t possible.

In 1961 Jerome purchased ground in Perry and had 25 cows.  That farm grew, as he handed the land down to his son John and his wife Betty who remain owners in the operation today.  The third Emerling family generation, John and Betty’s son Michael and his wife Elizabeth, are also owners in the current operation and are the main operators of the farm.

Mike is the head field coordinator and personnel manager, while Elizabeth is the financial operator. 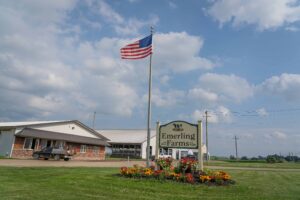 Emerling Farm has continued to change and adapt to the agricultural landscape.  They’ve recently completed a transition of their dairy herd from traditional Holsteins to Jerseys.  With the new breed, there is a learning curve on care and nutrition, but the change was strategic to help lower the farms operating costs and allow the farm to expand their output without increasing their land base.

Jerseys produce a higher fat and protein milk than Holsteins, which commands a higher market value as milk is priced based on the volume and breakdown of those key components.

Jerseys have just 75 percent of the body mass compared with Holsteins, require 68 percent of the water, 89 percent of the land, and produce 80 percent of the greenhouse gases.  The result for the farm is with the same land base and the same water inputs, they can produce a larger quantity of milk to support the business.

The family has also made other major changes to increase its efficiency and increase its long-term sustainability.

A methane digester was added to the farm that breaks down cow manure and uses the resulting methane gas to create electricity.  This electricity is enough to power the farm buildings as well as the equivalent of about 600 homes.

The digester also can break down non-farm-created products, like food spoilage.  Rather than dumping expired and spoiled food into landfills where gasses will release into the atmosphere, they can be added to the digester and will add to the electricity production that gets pushed into the local grid.

The Emerling Family has also been very active in the community, promoting and educating on agriculture.  As fewer and fewer Americans farm, the importance of explaining where and how food is produced is important to connect non-farmers with the landscapes that grow the food we see in grocery stores. 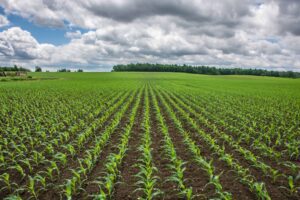 The family was the founders of the Wyoming County-based Agri-Palooza. Agri-Palooza began in 2000 and is a day that highlights agriculture in Wyoming County and welcomes the public onto a farm to learn about Wyoming’s No. 1 industry. It is free and open to the public.  Visitors view educational displays, tour through farm displays, can climb into machinery, view the barns, and hear about the entire farming process from planting a seed to harvesting the crop.  The day is a family oriented with children’s games and activities all focused on agricultural themes.

Agri-businesses and related organizations are also on-hand to show their work and the importance of agriculture to our local economy.

On the farm, the family is using drag lines to inject manure back into the soil.  Manure is a valuable component for fertilizing soils and the farm benefits from ensuring those resources remain in the soil to benefit their crops.  The injection also helps reduce odors and other off-farm impacts on neighbors.

Lands protected as part of this project include over 7.6 miles of scenic road frontage — agricultural open space that defines the rural character of the area.

The protection of the Emerling Farm was supported by the Town Board of Perry and the Wyoming County Board of Supervisors.  The farm was the top-ranking farm in the local ranking process before being submitted to New York State Ag and Markets for consideration and eventual selection as valuable agricultural land to be permanently protected.

The protection of the Emerling Farm was supported by the Town Board of Perry and the Wyoming County Board of Supervisors. The farm was the top-ranking farm in the local ranking process before being submitted to New York State Ag and Markets for consideration and eventual selection as valuable agricultural land to be permanently protected.

This project was the result of a collaboration between Genesee Valley Conservancy, Wyoming County Board of Supervisors, Wyoming County Agricultural and Farmland Protection Board, the Town of Perry, and the New York State Department of Agriculture and Markets.  To date, the collaborative effort between Genesee Valley Conservancy and local partners has resulted in over $30 million invested in protecting over 17,261 acres of some of the State’s most productive agricultural lands, here in the Genesee Valley.

Genesee Valley Conservancy works throughout the Genesee River watershed to protect high-quality habitat, open space, and farmland for the community.  The Conservancy now oversees the protection of 27,618 acres.

Landowners in the Genesee River watershed interested in pursuing conservation options for their property, be it farmland, habitat, or a potential public nature preserve, should contact Genesee Valley Conservancy for more information.

A peek into the Pike Winter Carnival

A Calf for a Class Pet

Dain O. Kilian, 39, a former resident of Warsaw, was arrested after his parole officer visited him on March 3, 2022. A press release from...

A pedestrian versus vehicle accident that occurred on North Street (State Route 98) in the Village of Arcade on Jan. 23, 2023, resulted in a...

The Wyoming County Sheriff’s Office reports a domestic incident occurred on Dec. 29, 2022, in the Village of Silver Springs, according to a press release....

A peek into the Pike Winter Carnival

The Warsaw Central School District Board of Education held its...

The Warsaw Central School District announced on their Facebook page...

The Warsaw Board of Education accepted a donation from the...